A living legend was laughed at.

The legend I’m talking about was on his hands and knees, in his office, with an empty suitcase next to him.

What you don’t yet realise is he’s responsible for something that likely brought you a lot of joy, if you’re over 30 years old that is – as of 2018.

In the early 1970’s in icy cold Finland, a guy called Jorma Nieminen (known as the Father of the mobile phone), walked upstairs in their companies offices. This company would later be known as “Nokia”.

Nieminen (don’t worry – I have no idea how to pronounce that either) walked into their Sales Managers office, Mr IIpo Rossi.

Rossi was on the floor, on his hands and knees. With a big old empty suitcase and pieces of electronics all around him, that had all been ripped out of his recently developed car phone. (for anyone under 30 who hasn’t seen a 80”s – 90’s action movie, the car phone was actually built into the car. You would pick the phone up that was still attached by a cord, hold it against your head and put it back down again in it’s slot to hang up. I’m also too young to have ever rode in a car with one of this, however, I’ve seen the movies).

Rossi was in a big panic, working frantically Nieminen recalled, crawling from one side of the junk pile of electronic parts to the other, still wearing his suit and oblivious that Nieminen was standing in his offices doorway, watching him, wondering what on earth he was doing.

Rossi was grabbing big pieces of his earlier designed car phone and trying to position and fit them into the big old-fashioned suitcase he had laying opened next to him. He was moving the pieces around, repositioning them, trying to get everything to fit.

Nieminen was still looking down at him, looking at the mess and the back of his head while Rossi was scurrying around the floor.

“What are you doing!?” Nieminen finally asked him.

Rossi replied talking fast and without even looking up..

“Some people want to have a phone at their cottage, or on their boat, or in a hotel.. and we don’t have a portable version yet! So I’m putting one together!”

And right there my friend, I introduce you to the company that would soon known as Nokia, and the two men acclaimed for inventing the mobile phone.

Weeks later after the suitcase-but mobile-phone was invented, Nieminen and Rossi were part of a meeting with the rest of their team. They were discussing this new innovation and were wondering what to call it.

Someone in the room said “mobile phone”. And half the room laughed at the idea.

“Who’d carry a phone around with them?” – someone scoffed at the idea.

At the time, the thought of carrying a mobile phone was completely new. Phones and the need to get around and do stuff, were two seperate things. Let me try to come up with an example to help explain how “foreign” this sounded…

Something we need to do often is: eat.

Something else we need to do in out daily lives is: go places.

So imagine a portable fridge that ran on solar power? Imagine it to be the size of a back pack and made out of a more light weight material.

Wouldn’t that be weird if someone introduced this idea in a meeting you were a part of? You’d scoff and say “umm, I don’t think people need to be carrying a fridge around with them.”

This is just a wild example of course, but that’s the frame of mind other people had about this thing. They personally didn’t see a need for it, and nor did the average person at that time.

But there was a growing personal need for it, because the desire to communicate faster and at will was growing.

Maybe there’s a need for personal chilled food too? Sounds crazy right now, but if I had proof that there was a need for it and it was a growing need, AND if people called me crazy… what should I do?

Lucky for the good folk over at Nokia, they built it and tested it on the market. 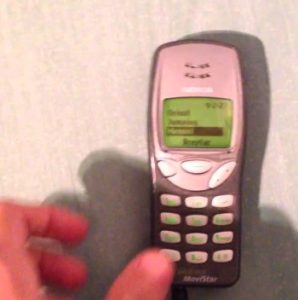 So who is doubting your idea?

Maybe you are. Is that why you haven’t launched it on Facebook yet?

Marketing an idea on Facebook is a fantastic way to see if there are people anywhere in the world who are looking for your product idea. You could start a private Facebook group with future customers, they could help you build the product (or service).

You could set up an Ad on Facebook talking about your new product, and ask them to enter their name and email address if they want to be kept up to date with progress and the chance to get the early bird price when it’s released.

If no-one enters their name and email, that could mean you shouldn’t invest your money in this new idea yet. You can try it again in 2 years.

But at least NOW with the power and convenience of Facebook Ads, you didn’t have to spend and waste your life savings building something no-one wanted yet!

I’ve got a bunch of resources here on this website to help you set up and launch an Ad on Facebook. Have a look around to see what’s available now.