Ok not really, but something he was involved in can give you a very important lesson in Facebook Ads.

But here’s something you probably didn’t know about the George Foreman grill… It was originally manufactured and sold as a taco maker. 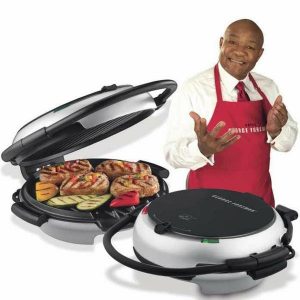 I know, I know. I’ll let that sink in for a moment…

The idea the manufacturer had when designing and selling these machines, was that you could cook the meat for the taco on the grill, and you could then slide the meat down into the taco shell – I guess you’d have a taco shell sitting there like a baseball glove waiting to catching it…?

Isn’t this product a groundbreaking innovation?

No, it isn’t and wasn’t. The taco maker didn’t sell, which should come as no surprise.

Why is this? And what can we learn from this and how can we apply the lesson to our business ideas and companies. Here’s what I think, and correct me below in the comments if you think I’m wrong.

It’s simply because NO ONE woke up in the morning and thought to themselves… “gee, I wish I could slide my meat straight from my grill, into my taco!”

So what do they do now? My guess is they’d probably spent close to a million dollars into design, manufacturing and first production runs at this stage.

Regardless, that marketing company knew that this product needed a rethink, and it definitely needed a “hook” to capture customers attention and their imagination.

What on earth, could this machine be repackaged as?

We now know, they got George Foreman to sign on the dotted line and the “Knock Out the Fat” slogan was created. Apparently George Foreman and his management were not too convinced about the product so they bargained the deal up to 45% of all profits.

How did that work out for them?

Firstly, take a note that the “Taco maker” didn’t change. It was just repackaged and renamed as a grill that let the fat and oils drop down into a tray, which in my opinion is just a big waste.

Foreman found out that it was worth his time and his trust in the marketing department. Foreman made $200million (and counting I suspect) from this failed taco maker.

This is all for an unwanted, terrible, an unsuccessful, silly to begin with taco maker!

I’m unsure if they’re still counting but I read somewhere that they had sold 30 million of these machines.

So now let’s take a moment to think about your product, or the service that you are offering. Does it pay to think about how it will be positioned? And if it’s sold as something that people will actually want and resonate with?

We at least know half a billion reasons why it is important, so let’s chalk this up on the board as a ‘yes’ for product positioning.