Hello we are live! How are you? It’s Craig Marty here, just checking in to say HELLO.

I wanted to do some more of these posts, videos and Facebook lives for my shameless ‘self-promotion’ drive that I’ve started. But it’s simply been far too busy, too much going on (which is a good complaint to have!)

But I’m back here now to give you an update on what has been happening, and I’m sure you HAVEN’T missed me all that much anyway! 🙂

Like I said, there’s been a lot going on. About two weeks ago I finished writing my new book on OFFERS, that is “marketing OFFERS”…

The book is called “How to OFFER What You Are Selling, So Customers Can’t Refuse!” – this book is all about your offering, what are you offering when you are putting something/anything out into the market, when you are selling something.

The book asks you to question what is the thing you’re going to offer the world, and how can you do it better to make more sales.

It’s kind of a boring topic just by itself, but if you are a business owner and you want to sell more of your products and or your service, than this book is going to be the best thing you read over the next 24 months!

You can get it here at the following link on Amazon – click here to see more. 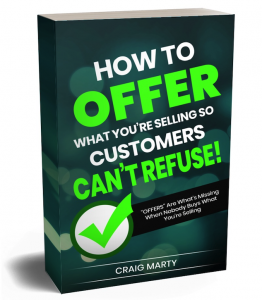 How to Offer What You’re Selling So Customer’s Can’t Refuse – book by Craig Marty.

It’s funny when you write and publish a book on Amazon, after loading it up – if you live in Australia you can’t easily order a copy and have it sent to you right away.

There’s a thing on Amazon called ‘author copies’. Which enables (most) authors to order a copy and have it shipped to them just like any customer will. This allows you to see the finished book, and hold it to see what it looks like in person!

Author copies only cost $2-$3, just to cover the cost of printing I guess. But if you’re living in Australia, you can’t easily get an author copy, for whatever reason I don’t know.

There is Amazon here in Australia of course at Amazon.com.au, but they are probably just not printing here yet.

So I had to buy a copy of the book like any other customer and have it sent to me. On top of that, I had to buy it from a UK based distributor on Amazon who WILL post it to Australia. Because Amazon US said “this product is unavailable for shipping to Australia” – like a lot of other products on Amazon.com are.

(I’m sure this is surprising to most people in the US, where you can buy almost anything and have it arrive 12 seconds later).

What’s been taking up most of time lately, outside of getting this OFFERS book finished and live, has been re-launching my Facebook Ads Book globally, because it was previously only really promoted in Australia.

But I want to spend more time focusing on this book because it’s one of the ways I’ll be working on growing my own personal brand.

The funny thing is that I had to stop and ask myself.. “Why did I ever pause the Facebook Ads book campaign?”

It was probably just because work with clients and other promotions took over my time, but when I went back into relaunch the campaign in Facebook Ads I had to question WHY.. because it was all running smoothly, it wasn’t losing money.

This is very often something that business owners and aspiring entrepreneurs do! They will launch a campaign, get it running, get some sales. And then when I sit down to talk with them, I’ll ask “how did it go?” , “how were the results?”, etc, etc.

So my question to THEM is.. “why did you turn it off?“. These people have the same realisation that I had which is “I don’t know, I probably should have just kept it running.”

It’s funny how the human brain works sometimes, but that’s just what happens.

I recently wrote a post about something I call ‘Digital Hair Gel‘. This is a funny post I wrote about peoples need for “stuff” online. Business owners think that they need to have a whole range of stuff to sell their products and services online.

This is all stuff that they think is REALLY important for marketing their business and getting customers, getting sales from the internet.

So I had this thought that, all this kind of stuff is kind of like hair gel for men. Men will wear hair gel, they’ll put hair gel in their hair because they think that is what’s important!

They believe this is going to make them look good, or stand out from the crowd, to get a girl, to get a date or whatever!

But of course there is a lot of men out there with fantastic partners who don’t wear hair gel! Hair gel is just one of those things that we’re told we need, and maybe you think you need… But at the end of the day you don’t really need it to get what you want.

(Unless perhaps… you’re auditioning for a hair gel commercial).

So I call chatbots and all this other new stuff “digital hair gel”. It’s simply NOT what is important.

These things can work, there are people growing their businesses using these and similar tools, BUT they are not what you should be focusing on for the first 90% of launching and growing your business online.

Before sitting down here to talk to you now, I jumped online to record a quick and new video to advertise my book on Facebook Ads.

The previous Ad I had running on Facebook for the Facebook Ads book is good, it works and it converts. But it’s just text, it’s written text and an image.

But there is also a different bunch of people (a “segment” if you wish..) who like and prefer to watch videos on Facebook. So I’ve just recorded a couple of videos for the book, and also for the my advanced Facebook marketing course.

These new videos are based on the text version of what the old Ad says. Because if the old sales message works in text form, it should also perform the same way in video.. or in audio or however else I’d want to promote it.

The important thing is always the sales message… and not the product itself.

You can try this for yourself too.

No promises of course, but if you have a written Ad that is performing well.. If you take the words from that, take the same message and record yourself on video saying exactly the same thing that the text version says, you should probably have a very similar result.

But the new results will be from “video people”. People who like to watch videos, who probably didn’t respond to your text version of your Ad at first.

Does this make sense?

Ask me your question about this below in the comments if you have one.

The same thing happens in reverse too. Go FROM video.. and create a text version.

There’s a variety of different types of people “out there”, and especially on Facebook. You have customers who:

Of course there will be some overlap. Personally I do all three, but not everyone does.

If you are finding that your Ad results are starting to slow down, or you’re not getting the results you used to get, have a think about converting them to the opposite of whatever form they are in now, to engage with a different segment of your audience.

It doesn’t have to be fancy or professional. Turn your iPhone to selfie mode and start recording.

Facebook is a social network, it’s a real life network… your customers are going to think it’s very normal to see a selfie style video.. or a rough and ready video straight from your phone.

On this note, your Ad on Facebook SHOULDN’T scream “Ad”. When people come across your Ad on Facebook it will help if they don’t immediately recognise it as an Ad, because they are more likely to keep scrolling past it… even if it would actually interest them a lot!

The more you can have your Facebook campaign look less like an Ad, the better results you’ll probably have.

Don’t put more than 1 hour into preparing for the video.

A raw video from a phone can convert better than a professional studio shot video that screams “THIS IS AN AD!”

Alright I’ll wrap this post up now, but I’ll be back again soon after the re-launch of the book to share more with you about what is going on and what I’m getting up to.