The Best Time to Sell Your Product

Get a FREE copy of the book I wrote for beginners, on Facebook Ads.

This book will walk you through the two things you should do BEFORE you set up your first Ad, and then also it will show you what type of Ad to use and how to set it up.

Get a FREE copy of this book here.

When the Christmas and New Year season finishes every year in Australia, the country turns to the next long holiday which is Easter.

This also brings up the controversial topic that gets the media and the people that believe the media all ruffled, and riled up.

The controversy that I want to talk about is the Australian tradition of Hot Cross Buns.

They are a little baked bun, with cinnamon, and other mild spices, and sultanas.. They are best eaten toasted with butter melted all over them.

Some Australians might be a little angry and surprised to hear that Hot Cross Buns originated in the UK. Which shouldn’t really be a surprise if you think about it.

Hot Cross Buns are usually reserved for the Easter time of year. And that’s where things start to get a little controversial. 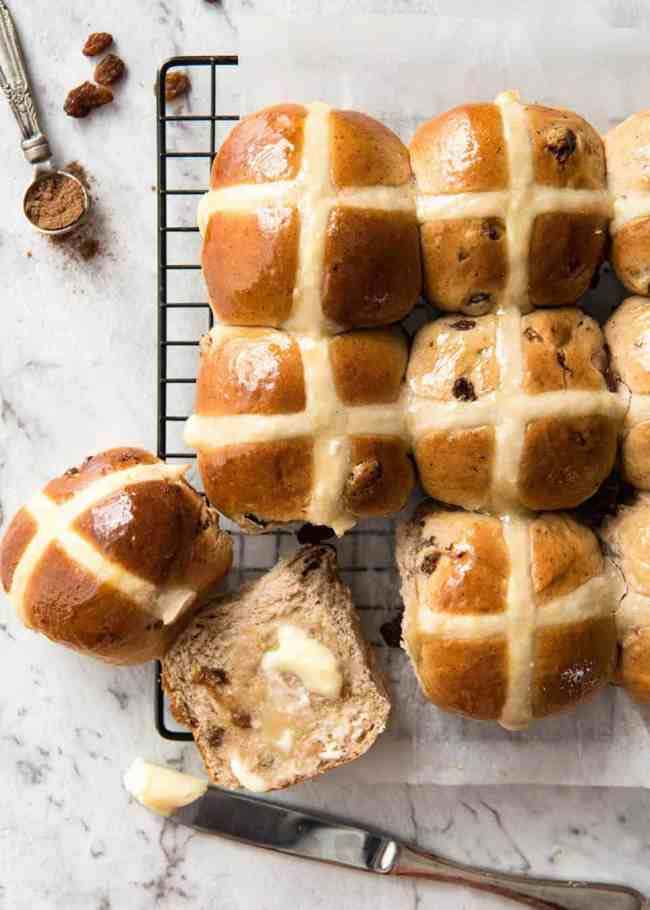 These delicious buns are cooked in bakery shops across the country, and I’m not sure when but at least 30 years ago Australia’s largest grocery chains also started to sell them fresh.

Generally speaking, if it’s Easter time, in a house inside of Australia – there is a good chance there will be Hot Cross Buns on the kitchen table. They are associated with religion of course being an Easter bun, however, it’s safe to say they’ve been adopted as a national custom even outside of religion.

Every year, the largest grocery stores have started to sell Hot Cross Buns earlier, and earlier in the year.
Starting in the days and weeks leading up to the Easter Holiday in April, and progressively getting earlier and earlier.

That’s where the media and members of the general public start to cry FOUL and protest about the grocery chains and bakery chains “pushing” Hot Cross Buns on everyone, earlier and earlier every year.

Their protest is that the grocery chains are just trying to make more money, it’s not the traditional time to sell them and so on. Which is all 100% true. In my view. However, I don’t join them in their protest.

For me, Hot Cross Buns are so delicious I’d eat them all year round. So on January 1, 2018 when I passed through the supermarket and saw hundreds of hot cross buns on the shelves, I was happy for two reasons.

The first reason I was happy is totally selfish, it’s because I love them and I bought six right there and then. My wife and I had finished them all within a couple of days.

The second reason is, from a sales and business perspective, I appreciated the boldness of selling them within 8 hours of the New Years Eve Fireworks, exploding in the sky.

The thing that I find a little funny about the controversy surrounding selling Hot Cross Buns when it’s NOT Easter is that, the people complaining don’t actually have to buy them.

But I bet some of them STILL do! (and still enjoy them!).

The January 1 sellers of Hot Cross Buns know that people are going to buy them. So they make them, and offer them for sale.

Isn’t that a great business model?

For me, Hot Cross Buns are great. Sell them in October and i’ll buy some. Long gone are the days of gathering the family around on Easter Friday to enjoy the single serving of Hot Cross Buns for the year. Yes, that’s a sweet tradition, but nothing lasts forever, and I don’t dwell on that.

So Why Does This Have A Dedicated Blog Post ?

As business owners, or people just trying or wanting to sell a product or service. We can get very caught up in creating the product.

Thinking about what to include, what not to include. How it is designed, and what the logo is going to be, and so on.

We’ll spend weeks or months on having a website designed and built, before we even try to sell the great idea we’ve invented or are just bringing into the world.

The lesson for this podcast is, sometimes you just need to not over complicate it and just sell what people want.

You could get caught up in ‘there’s a better time to sell it’, ‘I need to first get this ready, or get that ready’, or you could just sell it.

And even more important than that is, when you actually try to sell the thing you’re planning on selling, it might not go as smoothly as you imagined.

What You Can Do

So save yourself months and hundreds or thousands in costs to develop it and make it look pretty and just sell a few. See how easy it is, and if you really do have a good idea or not.

If it’s something people want, they will buy it.

There is very little chance that you can convince someone to buy something that they don’t actually want.
That’s kind of like the old saying of putting lipstick on a pig.. it’s still a pig.

It’s the same situation with the Hot Cross Buns. The stores are selling them because they know that hundreds of thousands of people across the country are going to buy them.
That’s a pretty easy decision to make.

You don’t need to break the law to be in the sales business.

You don’t even need to break traditions to be in the sales business.

I suggest you don’t let any reason or excuse hold you back from just trying to sell the thing.
And that’s it

If you’re interested to read more on the history of Hot Cross Buns, check that out HERE.