Where to Find More Customers.

So you’ve heard the expression, birds of a feather flock together? Yes?

Well, how does that relate to your customers? Let’s dive into that right now.

If you’re just joining us, that’s good news for you because there is an entire months worth of more posts just waiting for you to listen to and learn something from.

I know that the readers of websites are made up of two main groups, they are the people who already own and run a business and those who are thinking of starting their own business. All the episodes are relevant to you no matter which one of these two groups that you fall into.

In this episode I’m going to talk about that old expression..

“Birds of a feather, flock together.” 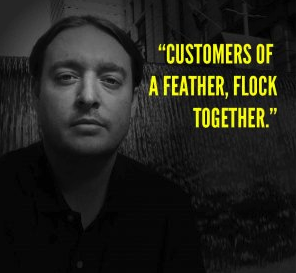 “Customers of a feather, flock together”. Craig Marty

I just did a quick google search because I had no idea where that saying came from either. Turns out it surfaced somewhere around 1545 or also in 380BC when some guy you might of heard of called Plato wrote:

It’s funny how a quote from 500-1000 years ago is still so relevant today. And the lesson I have for you today is that there’s only so much that can be said, before we all start repeating ourselves again, and repeating one another also.

I feel like Seinfeld should’ve had an episode about this, how we’re all really just saying the same things decade after decade and eventually everything will be over said so much that we just stop talking..

Of course that will never happen. Because every situation is somewhat different and we all like to put our two cents in. It’s a perfect system isn’t it?

They are just being used on Facebook, or used in an email to help convince the potential customer to buy whatever it is they’re trying to sell.

The reason I’m recording THIS episode of the podcast is because I remember about a year and a half ago when I started to think about this expression “birds of a feather flock together” and how it related to trying to market your business.

Quick Story About This

Your Customers Flock Together Too!

I was driving to the shops, it was day time. I can’t remember what I was going to buy. Having a home office and running your own businesses has it’s advantages like that. But it’s also risky because every time you feel like a snack you can go out or go to the fridge and get one, making it very easy to put on a few too many kilos.
Anyway, as I was driving to the shops I saw two kids, probably teenagers walking together leaning in very close, talking quietly to each other. They were both wearing hoodies that covered half their face and just gave that impression that they are up to no good.

Of course I’m well aware that they could’ve just been talking about girls or cars..

From a distance the pair looked like they were trying to hide something in their hands, they were both walking close looking down at it. Their hoodies were covering half of their face.

They made no attempt to blend in which I always find funny with people that do actually commit crimes (not that I know these kids were), but sometimes I feel that if you’re about to commit a crime, maybe dress up in a business suit first.. Doesn’t that just make more sense?

Ok, tips to thieves and criminals aside..

When I saw these two kids at least LOOKING like they were up to no good, I thought how do you stop your own kids from falling into that group? Knowing that in the near future I’d have kids of my own.
Birds of a feather flock together.

If my kid was the same age, arrived at the same school as these two after moving into the area, ended up sitting next to them and they shared any common interest, even it was just hating school, it’s only natural that my kid will bend a little, or a lot to fit in with this new group.

It wouldn’t be a shock to see my kid going to school the next day wearing his hoodie.

My kid gets home and says “Dad, can I please get a soccer ball?” – you couldn’t be surprised by any of this.

Now back to business, literally:

This is the same thing that happens with your customers / or with your “clients”.

If you’re already in business, let me ask you: are your clients fun to work with or are they a pain?

If they are a pain to work with, it’s likely all these birds flock together too.

Imagine that you owned a cafe in an area with a very low average income and a lot of unemployment. You were forced then to design a menu that fits this general demographic of people. Very cheap coffee, very cheap meals and that means non-elaborate meals too.

As the owner or the chef of this cafe, it might be hard to impress people when you need to cut costs at every turn so that the average person living around your cafe and walking past your cafe, won’t be turned off by the price.

Imagining this scenario, would you say the average customer in your cafe, in this demographic, would be happy to spend a little bit more money, maybe order the a slice of cake too after their coffee or meal?

Or would it be more of a struggle to make good margins on every ticket, or from every customer?

I’d say it would be more of a struggle, and it’s simply because your cafe is on a street corner surrounded by customers in this demographic.

If you’re unhappy with your customers or clients, if they are a pain to work with – it’s because birds of a feather flock together.

Imagine you mowed lawns for a living and you’ve been charging all your clients the same amount of money for the last 7 years without increasing any of your prices. You know you’re not making as much as you use to before and the cost of everything else is going up around you.

If your working radius was in low rental income area, would you have more of an issue increasing your prices without losing some customers? Compared to if all your clients were in higher income suburbs where the majority of your clients owned their own home?

You choose your own customers. If you realise it or not.

If you design a new whatever, and you say this is going to sell so many because it’s the cheapest on the market.
You say: “It’s only $9 when everything sells for $20!” – You’ve chosen a group of customers that are the lowest demographic. Because the market has already determined that $20 is an ok price.

Now you come in offering $9 to anyone who is willing to switch from the $20 product are going to be the ones who love to save every last cent, and always look for the cheapest of anything they are buying.

Now can I ask you a question about this?

It’s a simple decision that a lot of business owners don’t realise they have the option to do. Choose and find more of the customers they want.

If you’re that lawnmower man or woman, where would you drop your letterbox flyers? If you were going to use that strategy to get some more customers?  Why would you focus anywhere else OTHER THAN high income areas?

If all your clients or customers are giving you the same hassles, and troubles. You’re finding them in the wrong part of town.

If all your clients and customers NEVER choose your most expensive service, whatever that is,  It’s because you found them all in the wrong part of town.

Customers of a feather, flock together.

Here’s something else to think about. It’s not just what suburb your customers live in, or what side of tracks they come from.

This same principle is seen in many different areas of your business. If you are advertising your business in a variety of different places, and you wake up tomorrow with:

These four different groups, are going to give you different results. People who listen to that radio station you advertised are a certain group of people.

And the 10 people who found your website and sent you an email enquiry will behave differently too.
One of these groups will outperform the other, when it comes to who will become your paying customer.
Does this all make sense?

No two groups of customers will be the same, if your advertising on Facebook and your enjoying the results, and you then decide to run a full page ad in the newspaper, the customers and the results will be different.

If you’ve ordered 500 letterbox flyers to be sent out before, but nothing happened there’s a few things that that could have caused that, but one will be the suburb you distributed them in. Try another 500 on the other side of town. The most expensive side of your city for example.

If you’re already in business, you’ve probably had a group of customers that you really enjoyed working with. Now that you’re thinking about them, what did they all have in common? Was it a big project? An expensive item they bought? Did you get a chance to spend more time with them, help them more and therefore get paid more? Is that why you enjoyed those jobs?

Now, how can you find more of just those type of people? If you know what they all had in common, that’ll make it easier for you to find more like them people.

I hope you got something out of this episode and you can see what type of customers or clients, you want your next 10, or next 100 to be.

Have a think about it, that’s a wrap.

Speak to you again very soon, goodbye for now.